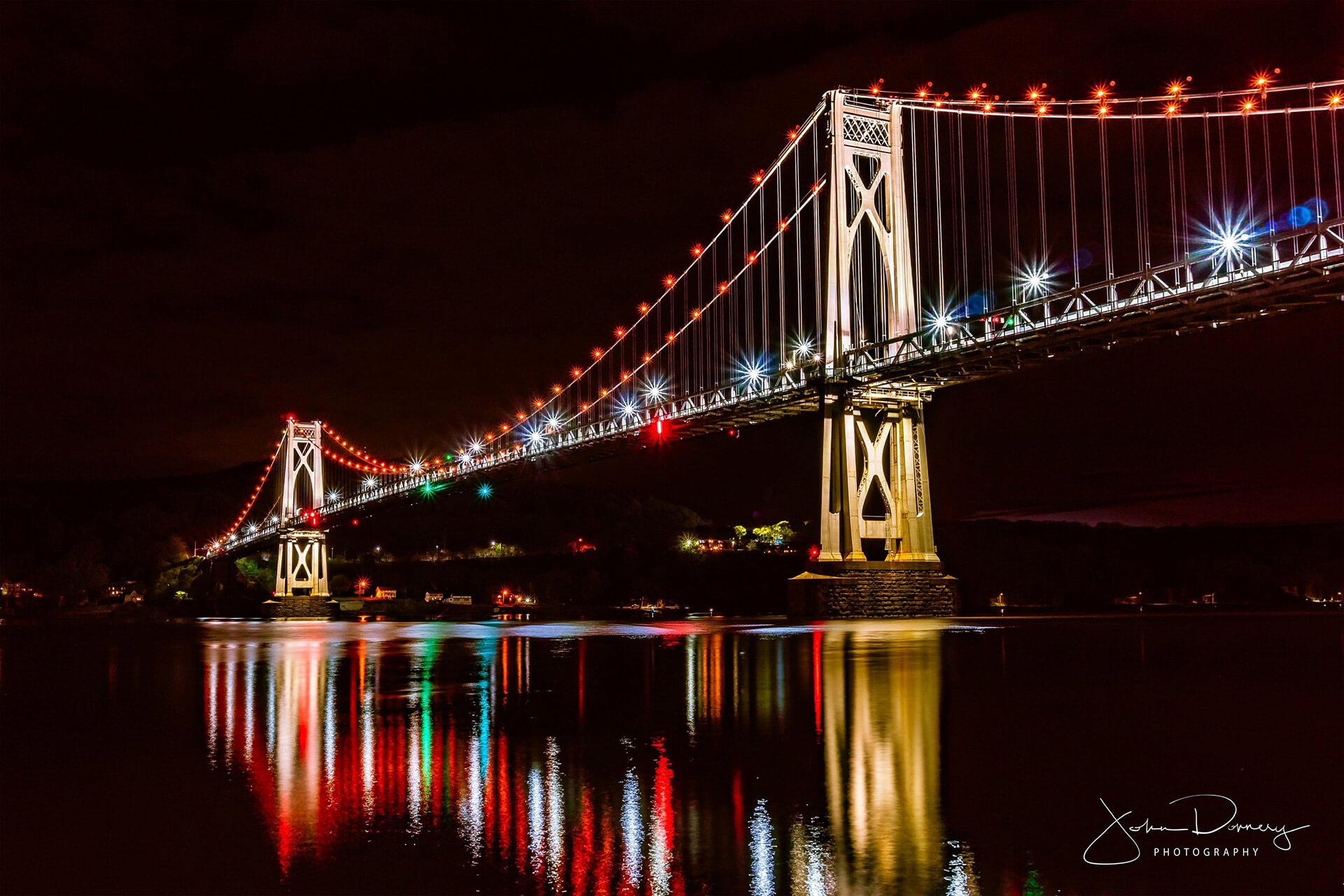 The idea for the Mid-Hudson Bridge was introduced to the New York State Legislature in 1923 by J. Griswold Webb and John M. Hackett. At that time, the only bridge across the Hudson River south of Albany was the Bear Mountain Bridge.

A great deal of lobbying was done by citizens in the Poughkeepsie area for a vehicular span, due to the efforts of the Hudson Valley Bridge Association. The Association consisted of a broad cross-section of local leaders, ranging from business people to civic groups to area clergy. One of the strongest proponents of a bridge in Poughkeepsie was a Catholic priest by the name of Monsignor Joseph Sheahan, who served as the pastor of St. Peter’s Parish in Poughkeepsie at the time.

Governor Alfred E. Smith signed bridge legislation in 1923, appropriating $200,000 to provide surveys, specifications and other preliminary work. The New York State Department of Public Works was charged with the job of constructing the span while the design of the bridge was awarded to Modjeski and Moran.

Ralph Modjeski, one of the most celebrated bridge designers in America in the 20th century was already familiar with the area because of his work on the Poughkeepsie Railroad Bridge. His gothic design brought the Mid-Hudson Bridge much praise, described as “superbly beautiful…the span is one of the very finest American suspension bridges,” by Daniel Plowden in his 1974 book Bridges. When it first opened, the bridge won recognition as the most beautiful suspension bridge in this part of the country. In 1983, the Mid-Hudson Bridge was honored by the American Society of Civil Engineers as a New York State Civil Engineering Landmark.

The opening day celebration on August 25, 1930 was officiated by Governor and Mrs. Roosevelt, former Governor and Mrs. Smith and Poughkeepsie Mayor Lovelace. The celebration included a parade, official dedication ceremony in Union Square, clambake, music, a block dance and fireworks. At 5:30 P.M., Mrs. Smith cut the ribbon on the east side of the span while Mrs. Roosevelt cut the ribbon on the west. An auto procession began from both sides and met in the middle. On that first day, 12,000 automobiles and 30,000 pedestrians crossed the Mid-Hudson Bridge for free.

The Mid-Hudson Bridge’s 50th anniversary was marked with a commemorative ceremony on August 24, 1980. The celebration included a rededication of the bridge plaque, speeches by local politicians and dignitaries, a reception at Barrett House, an antique car show and fireworks.

In 1994, the NYS Legislature passed a resolution giving the bridge the ceremonial designation of the Franklin D. Roosevelt Mid-Hudson Bridge in honor of the former Governor and President, who also played a major role in the creation of the New York State Bridge Authority.

At midnight on March 31, 1999, Dan Byam of Montgomery crossed the Mid-Hudson Bridge and handed in the last NYSBA commuter ticket. The E-ZPass toll collection system had now made commuter tickets a thing of the past. The combination of E-ZPass for commuters and the addition of another toll lane helped to eliminate morning rush hour delays, which were between 12 and 18 minutes.

The Mid-Hudson Bridge’s 70th anniversary was observed in 2000 with an open invitation to the public and area media to tour the bridge’s new pedestrian walkway and inspection of the east anchorage room, an area of the bridge rarely seen by the general public.

In 2009, during the Hudson-Fulton-Champlain Quadricentennial year, local composer Joseph Bertolozzi created his public sound-art installation, Bridge Music. This unique project utilizes sounds recorded on the Mid-Hudson Bridge to create a suite of music. Those who utilize the bridge’s pedestrian path can experience listening stations from April through October. In addition, the project is broadcast year-round within the vicinity of the bridge on 95.3 FM.

That same year, the nearby Poughkeepsie-Highland Railroad Bridge was reopened as the world’s longest elevated pedestrian bridge, the Walkway Over the Hudson State Historic Park. Together, the two bridges comprise the “Walkway Loop Trail,” offering pedestrians a walk along two beautiful, historic bridges.

The Mid-Hudson Bridge quietly celebrated its 90th anniversary due to the COVID-19 pandemic in 2020.

Bridge construction began in May of 1925, with the cornerstone laid on October 9th of that year. River piers were built upon 200,000-pound caissons which were set into the riverbed with the open end facing straight down. The earth below was dug out as weight was put on top of the caisson to push it into the riverbed until it struck solid rock. The caissons were then sealed at the bottom with tremie concrete so that workers could climb into the cavity of the caisson and complete the pier construction.

Construction progress was stalled for a year when on July 27, 1927, a severe tilt developed in the east caisson. Even though it was 84 feet below the water, the structure was slowly shifted upright with pulleys and dredging over the course of two years, at the rate of 18 inches per day.

The superstructure of the bridge was begun in April of 1929 and construction proceeded smoothly until it was completed 16 months later at just under $6 million dollars.

The newly formed New York State Bridge Authority acquired the bridge from the New York State Department of Public Works on March 17, 1933. The east approach to the bridge was widened in 1949. The new approach was constructed to help the flow of rush hour and weekend traffic move more efficiently.

The New York State Legislature authorized a $1.5 million dollar loan to NYSBA in 1965 in order to build a new highway approach and toll plaza on the western side of the bridge. The new toll plaza opened in December of 1967 with electro-mechanical toll collecting equipment. Prior to this, the toll booth was found where the bridge meets Haviland Road, which served as the west approach of the bridge in its early decades.

By the summer of 1983, testing of a new traffic flow system had shown that the normally two-lane roadway needed to be converted to three lanes during rush hour, with two-lanes supporting the heaviest traffic volume. A deck replacement project took place during 1987-1988, replacing the 57 year old roadway with minimal traffic interruptions.

On October 24, 1999, the Mid-Hudson Bridge Scenic Walkway was dedicated. It was the only walkway across the Hudson River in a 60-mile stretch from Newburgh to Hudson. A sidewalk ramp at the eastern approach of the bridge allowed pedestrians, cyclists and the handicapped access to the bridge from a local street in Poughkeepsie, eliminating the need to cross an active vehicular ramp from Route 9.

A painting and steel repair project was undertaken in 2000, including lead paint abatement, maintenance scraping, and painting and metalwork repairs below the roadway. Other projects, such as anchorage dehumidification, approach roadway repairs and substructure repairs, were also completed during 2000.

In the summer of 2001, necklace lighting was installed on the bridge. Designed by Baker Engineering, the system uses energy efficient LED fixtures. Each fixture is powered by a patented technology which uses multi-colored LEDs and a microprocessor to create over 16.7 million colors and color changing effects. Custom light shows for the Mid-Hudson Bridge are created on a PC using special software. The lighting designers can change shows and create new ones to commemorate significant events such as holidays and local celebrations. The Bridge Authority unveiled the new lights ahead of schedule, as red, white, and blue for the victims of 9/11.

Bridge Music
A unique plan using the Mid-Hudson Bridge as a musical instrument was realized in 2009 by Joseph Bertolozzi. Bridge Music is a sound-art installation that can be heard at Listening Stations on the tower landings from April 1-Oct 31 and also on 95.3FM in the parks flanking the bridge. 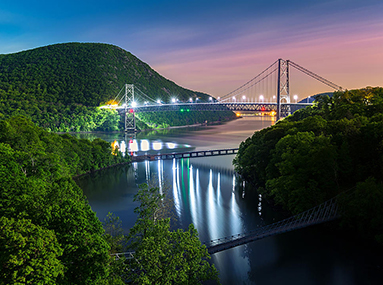 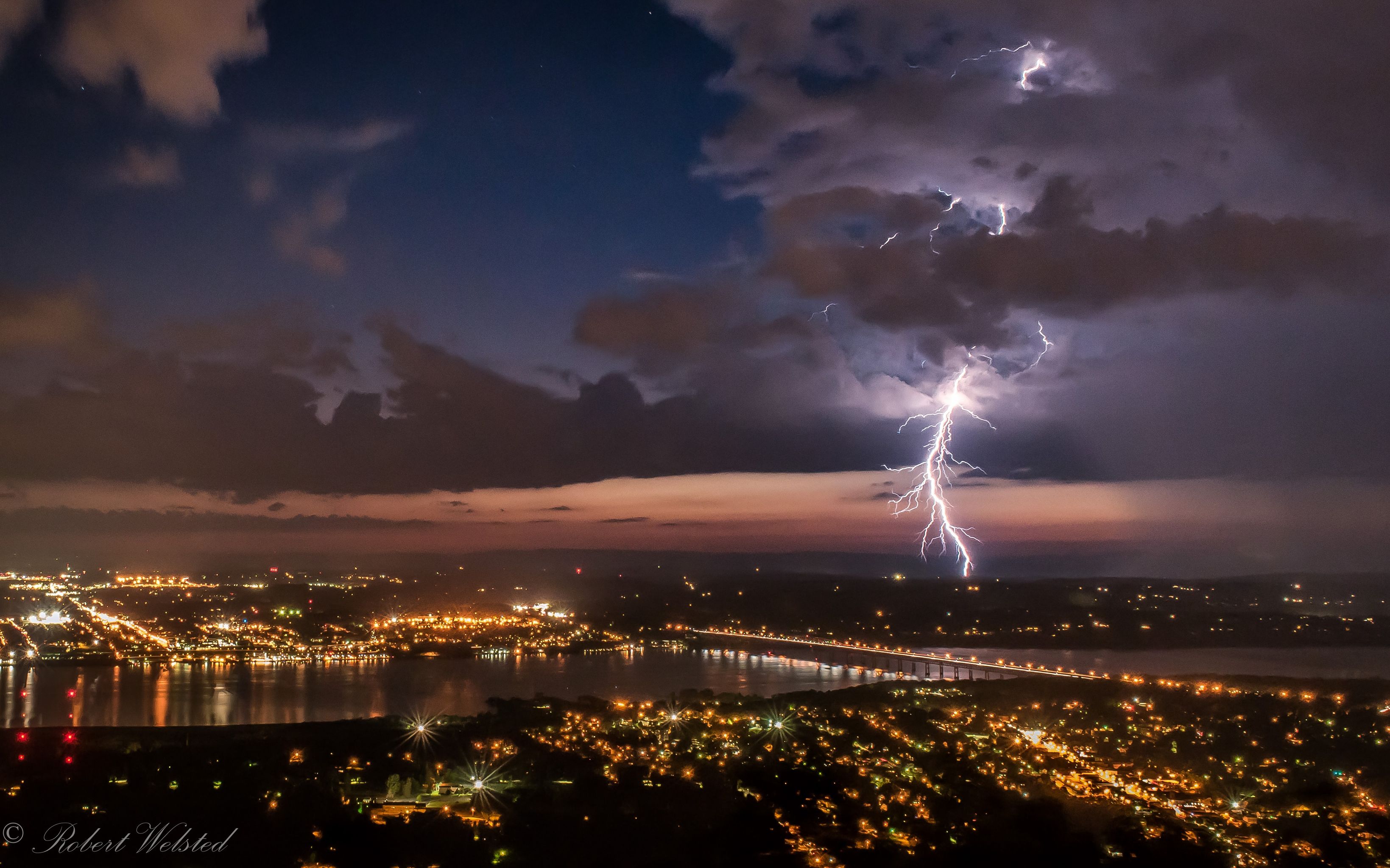 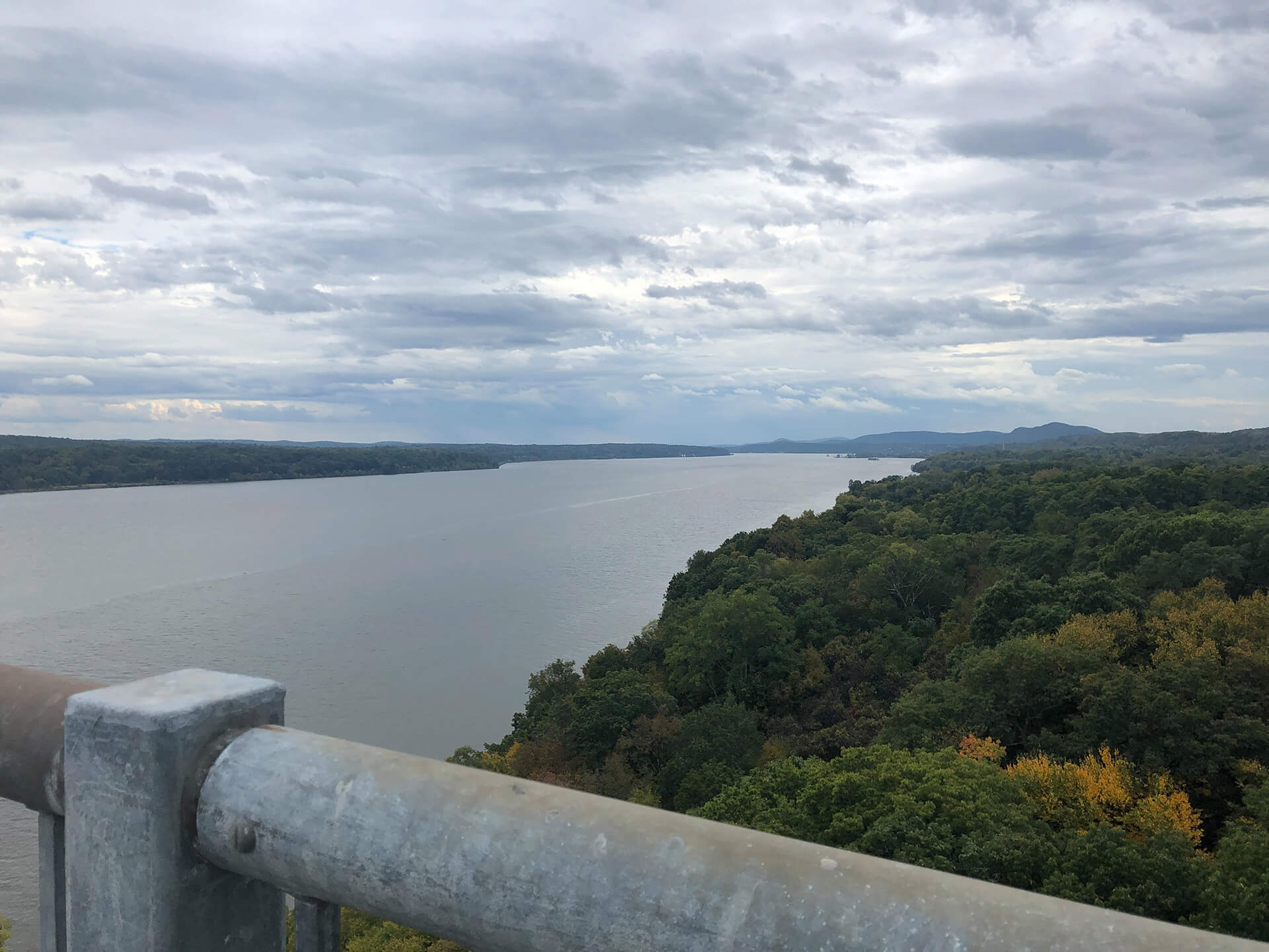 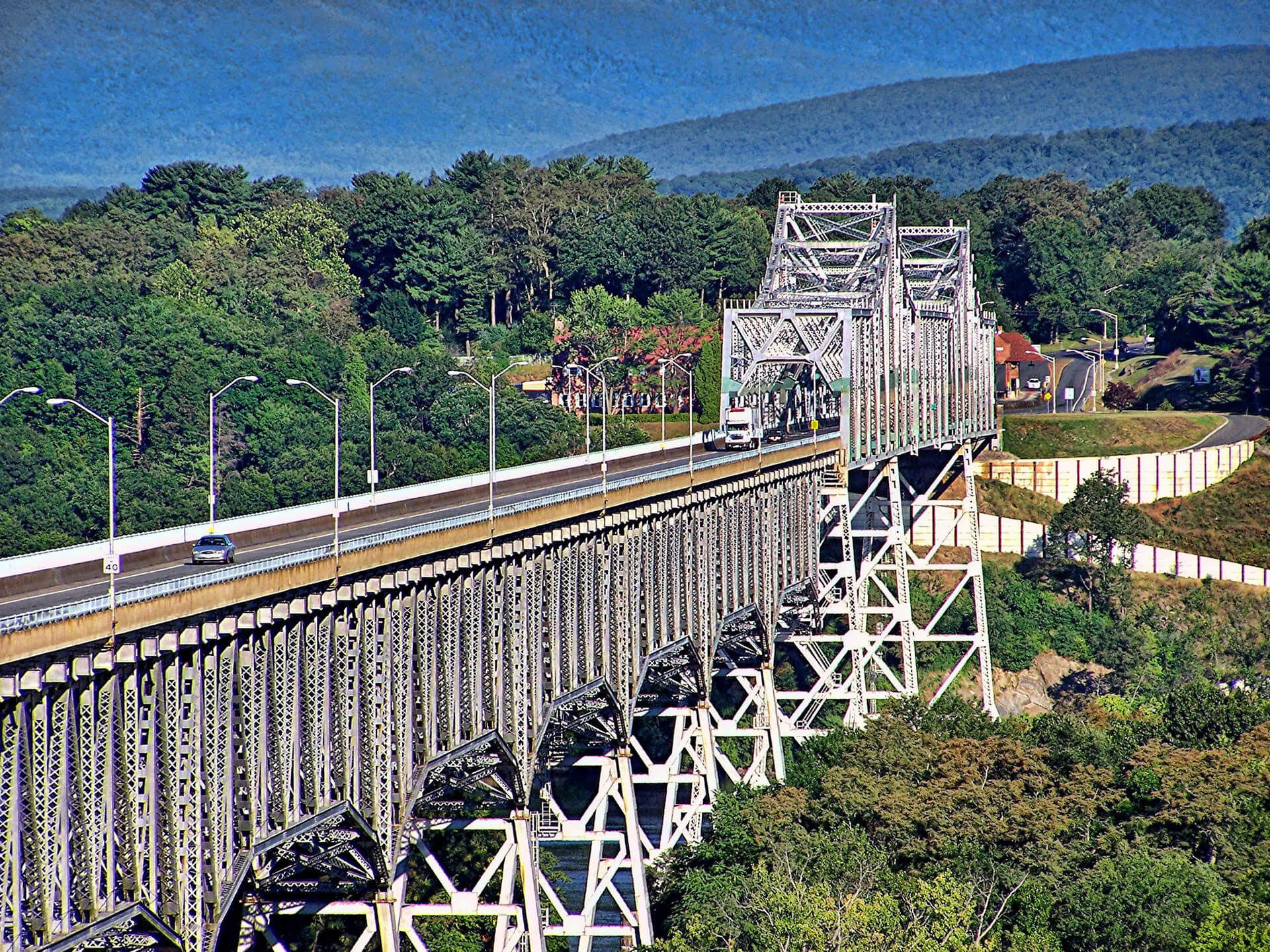